In Spring, Texas, just off the I-45 “North Freeway”, there’s a small business park that’s kinda hard to turn into. Sandwiched by chain link fences and between two other places, it’s hard to spot at night. If you miss it the first time, it’s maybe two clicks and a U-turn to get around to the same one-way frontage that approaches the correct driveway. But when you reach the fenced, corrugated-steel complex, you’ll find the Proto Makerspace on the front side of the second building. It’s labelled “2D” but it’s hardly flat – this facility has two stories! Inside the front door, you’ll be greeted by a chime, the gallery, and a guestbook. Down the hall off to your left is the electronics workbench, where there’s a new RepRap waiting to be calibrated. Past this is the main workshop; its large bay door rolls open to the tarmac to move the big stuff in and out, and keep the space free of welding fumes. A new donation, a sheet-metal cutter, swims against the current into the corner, just as much-needed space is being found by hauling other equipment away. The floor is dominated by a BigOx CNC, with a new 3-in-1 laser/mill/extrusion unit due to go up right beside it. The pegboards and shelves host various saws and hand tools, and several cleaning implements; keeping the space free of sawdust is an uphill battle. Also laying around are the latest projects, including a PVC skeleton that will be the core of an articulated First Order Electro-Baton, like the one from Star Wars VII. (Cosplay is kind of a big deal here; one member figures highly in the local Ren Faire circuit!) The more spacious upstairs is where everyone hangs out. There’s a laser cutting station that overlooks the parking lot, with a homebuilt SDR flight tracker perched on the windowsill. Behind this is the main area, the combination classroom/theatre/gaming lounge. This is where the kids come to learn – the space runs day and weekend classes, and better-than-summer-school week projects. One upcoming course is on how to program, with the help of Scratch, Minecraft, and a real live NASA engineer! In addition to the structured approach, ProtoMX has a junior maker club option for aspiring digital artists, that keeps the clean-room tools open for exploration. It’s not every space that strives to be this inclusive! Past the motion equations scrawled on the whiteboard, the theatre/gaming nexus is dominated by a PlayStation 4, a stack of games ready to play, or perhaps spool up Netflix and step over to the kitchen and fire up the popcorn machine! Thirsty? The beverage of choice is Coke Classic, often with Barq’s or Dr Pepper in the fridge too for a half-dollar donation. Open house night might just occasion an order of Papa John’s Pizza, with the brownie, or if you’re hours-long into your woodworking, it’s not hard to fix something simple between the microwave, keurig, and electric kettle. Among the more fascinating additions to the food arsenal is the multi-syringed PancakeBot, complete with griddle, coming to a fundraiser near you! Rounding it all out is the studio space for photography and screen printing. There’s a computer set in the middle side room, also host to the comfiest couch in the space, and 25 member storage cubbyholes. The last room, tucked into the corner, hosts the 3D printers: fast MakerBot clones, churning away, plus a marginally functional Black Devil Delta. They’re in the middle of printing iPhone adapters for the reflector telescope. The telescope (salvaged – you wouldn’t believe what people just throw away!) is observing the waxing gibbous moon. The aim of its laser-cut stand has to be adjusted every other minute as the moon crosses the sky. Two versions of the adapter come out of the printers, one for each kind of iPhone the members have in hand. Amazing photos come out until the first adapter snaps, then the other phone comes in with the other adapter, working even better with its HDR capability. Between an unsteady hand and immutable autofocus in the camera app, my own phone fails to capture anything useful through the objective. But in principle, given an hour or so and a set of calipers, suitable precision mount could be had for anything with a lens!

If you’re worried about traffic – and practically everyone in Houston is – Proto is a great bet if you live on the north side. I’d give ProtoMX the edge over all of the others on gregariousness, along with being a little more artsy and definitely more STEM-outreach focused than average in the Metro. It’s also open more and better-equipped than the other small spaces. They’re the first and last space I visited in the Houston area. All in all, a solid shop! 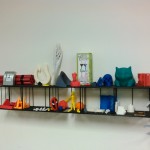 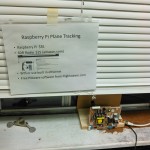