Starting west from downtown at 4pm, Katy may as well be in New Mexico. It’s about as exurban as you can get, complete with that malfunctional artery, IH10, for which no combination of lanes, tolling and HOV seems to abate the 5pm infarction. Traffic is terrible all over Houston, but this is plainly the worst of it, with too much distance to cover and hardly any parallel surface streets. Rather than dash way into town all the time, the creative types around here need a place of their own. Hence, Katy Makerspace. Today, they’re turning up their new plastic extruder, made in the Lyman/Mulier [link] fashion, with an old RAMPS board inside. The beads of natural PLA come out clear to slightly brownish from the nozzle, making cobra-like swirls on the desk. A little leaks out the sides, smelling vaguely sweet as it caramelizes on the exposed brass. They’ve fixed all but two main problems: The diameter sensor wigs out in the harsh sunlight streaming in through the open garage door; Okay, run it in the shade instead. The thermistor is also under-reading, which makes the heater coil melt the plastic well above the semi-solid temperature where it could be pulled sideways and wound onto the spool. Just setting the temperature lower doesn’t work because of the stock RAMPS software, which kills the extruder motor below a certain temperature (in a 3D printer, the motor can burn out trying to push jammed plastic). So the next step is to drill another hole in the project case so they can plug in the USB port and change that setting or the thermistor settings.

One member, a gemological expert, who fills me in a little on how the ancients cut sharp facets in gems using little more than spinning discs and sticks, plans to use another similar extruder to spin over a tonne of glittering clear plastic beads, half PLA, half ABS, into print-quality spools costing about half what you’d pay at MicroCenter, perhaps with an additional discount for the non-profit spaces. The work stretches late into the evening; takeout is Domino’s, and the preferred beverage is beer – did you know Shiner Bock comes from Texas? KatyMS has about 30 members, the most active of which are in just about each weekend. Those usual suspects include one one of the folks responsible for making the BuildYourCNC kits, which are beautifully custom-milled out of sturdy, water-resistant sheets of MDO – one such unit sits in the back of this shop! Another member runs back and forth trying to fix up the power supply on the FlashForge 3D Printer, swapping it out with a nearly identical unit from home for the time being. The leader of the space is a computer jockey, who brought in spare equipment like the rackmount and copier. Datawise this place is rigged out better than any place I’ve seen since Dallas, each wall lined with computer workstations; Internet by cable modem at the moment. A custom website checks members in and out.

They’re really keen on getting more of the region’s makerspace leaders together for some sort of council or convention, and like 10BitWorks, interested in doing a tour among nearby spaces. Katy Makerspace is definitely an active, industrious shop, punching well above its size. Well worth the trip! 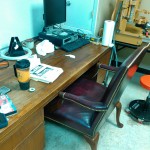 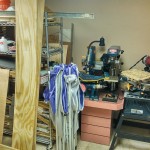 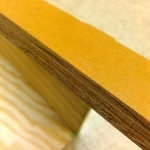 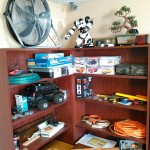